The Louis XV armchair and the history 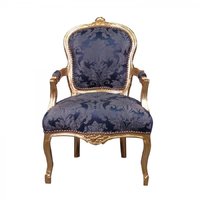 The Louis XV style armchair is a very popular seat model of the 18th century with two variations: the convertible seat and the Queen model. During the reign of Louis XV, the armchair is the seat seen. Symbol of the eighteenth century, it is a seat in the wooden chassis which comes in various forms: Queen armchair, bergère, canne ...

The most famous being the convertible armchair and its curved backrest. Molded or sculpted at the level of the sleepers, it is an elegant armchair, often light, which is characterized by its rounded and graceful lines. It largely testifies to the technical advances and innovations of the time in the manufacture of seats, to its armrests, set back because of the size of the dresses of the time.

The legs of the chair adopt the shape of the S and end in a winding. The seat is flared, and the armrests, very open, are set back in order to allow the ladies to sit comfortably despite their bulky dresses.

The seat and the backrest are often removable, which makes it possible to change them. Their blankets are made of fabrics or tapestries to the point, sometimes united, often decorated with flowers or representing various scenes: pastoral, fables of the Fountain, chinese, ... The frame is usually made of beech or walnut, Lacquered or gilded.

The chair has been designed in many categories, each with its own characteristics. The Queen's chair, with its flat backrest, is often heavy and difficult to move. The cabriolet armchair, the most famous of Louis XV style armchairs, is much lighter and has a curved back.

The seat of the Louis XV period

As regards furniture and furnishings, the eighteenth century is the century of luxury: the Louis XV style (1730-1760), testifies to this. And what is more emblematic of this style than the famous Louis XV armchair, the headquarters of the period? This Louis seat is characterized by a perfect execution: it is a light and graceful piece of furniture, notably thanks to its lines with a very rounded movement which seek to reproduce a vegetable style. The crosspieces, and often the feet and armrests, are adorned with fine moldings, or of various sculptures: rocailles motifs, shells, flowers, ...

The armchair Louis XV style, emblem of the period has been declined in many forms and still remains today among the most famous pieces of furniture.